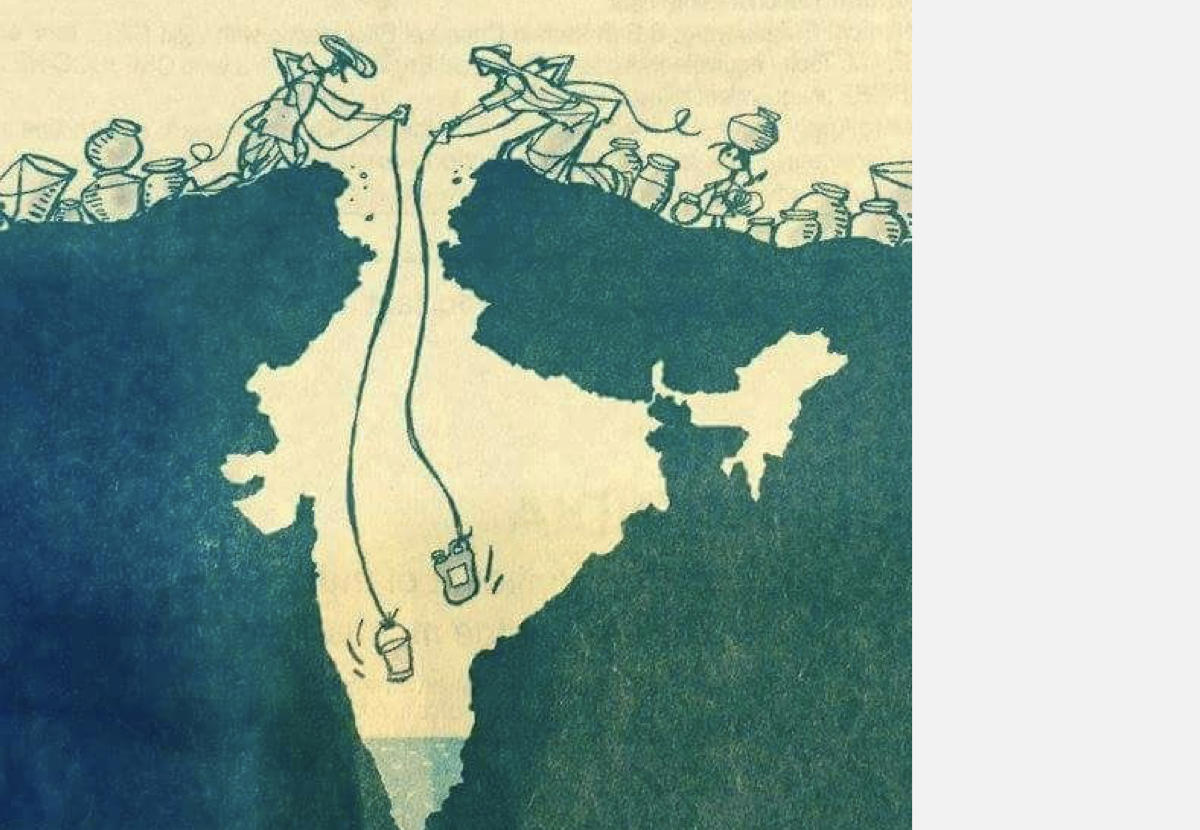 We don’t have to wait till 2030 to see the effects of water shortage. In the last couple of years between Cape Town in 2018 and Chennai in 2019 we have come close to experiencing what this world feels like as water begins to dry up and we can assure you this is not a life you want. Why wait for Day Zero to give us a wakeup call? Let’s talk about what we can do fix it.

At Lightbox, we believe that in India the two biggest risks to consumption (which accounts for ~ 60% of India’s GDP) are social issues and climate change

Climate change has many cascading effects, none scarier than humanity running out of water. In fact, despite water being an important resource needed for survival, cities across the globe face a water crisis year after year. It is estimated that by 2030, 21 Indian cities will run out of water if they continue to rely on current resources and continue with the current irresponsible consumption patterns. Water is one of mankind's primal needs, when one of these needs is not met we have seen humans’ resort to our most basic survival instincts which could include fighting for water. If people are worrying about water there is no way they are going to be concerned about buying cars or jewelry. The second order effects of water scarcity could be a body blow for our economy, recovering from which may take decades.

Moreover, we don’t have to wait till 2030 to see the effects of water shortage. In the last couple of years between Cape Town in 2018 and Chennai in 2019 we have come close to experiencing what this world feels like as water begins to dry up and we can assure you this is not a life you want.

Day zero is a day when a city’s taps dry out and people have to stand in line to collect a daily quota of water. Think about how millions of Indians queue up to collect their ration on a monthly basis. The only difference being that with water we will need to do this every day.

Cape town was months away from Day Zero in 2018 due to the lack of rainfall for three years. About 4MM citizens in the city were forced into saving water and being mindful of their consumption. Stringent consumption limits of 50-70L of water consumption per day per person were put in place. This limit was 1/6th the amount of water consumed by the average person in California every day and 1/3rd the amount the average person in Hyderabad consumes. To force water preservation the government made activities like agriculture, gardening, washing cars and usage of swimming pools illegal in the city. Additionally, strict fines were imposed on those that exceeded the water consumption limit forcing the citizens to ration their water usage.

Similarly in 2019, the four reservoirs that supply water to households in Chennai dried up due to insufficient rainfall for three years. Chennai typically has a consumption of 830MN liters per day and during the crisis the city could only accommodate 525MN liters per day. This forced shutting down of schools, restaurants, hotels and businesses asking people to work from home as the stress for water was high. To compensate for the rest of the water demand, water tankers were travelling to far off areas to extract groundwater which led to overexploitation of groundwater and inflated prices. A water tanker that would typically cost Rs. 700-800 was now costing close to Rs. 5,000 and what made matters worse was that customers had to wait for days at times to receive water. In fact, there were several scenes of people jostling each other to get access to this tanker water. All of this pain forced the citizens to become conscious about their water consumption. It was a much-needed wakeup call for the city to better manage their water resources.

Why wait for Day Zero to give us a wakeup call? Let’s talk about what we can do fix it.

In this blog, we are going to specifically be covering two aspects of the residential water management – Water Meters and Water Purification.

Today, our lives have been infiltrated with technology and smart gadgets which allow us to measure the time and effort we spend on different activities. From oxygen levels to heart rates and calories burnt on the iWatch, to time spent on social media on mobile phones to even the time we spent in meetings through our calendars. In all of this, we have forgotten to keep track of certain things that are extremely important but taken for granted. These include our water consumption, our carbon footprint, etc. All of us have been guilty of letting water run when we shouldn’t have, leaving that light in our room on when it probably didn’t need to be on or even leaving our car engine on as we wait for someone.  Two of the biggest drivers for our wasteful behavior in these matters are our inability to measure our wastefulness and the lack of any meaningful economic consequences from our wastefulness.

If you don’t measure it, you can’t improve it.

Unlike most developed countries, where each residential apartment receives a monthly bill of utilities that covers the monthly usage of electricity and water. In India, we only have the provision to receive electricity bills based on the resident’s usage due to the lack of sub metering for water in apartments.

The needs for sub metering water in India are several:

1. Due to the lack of sub metering, the water bills have been disproportionate to consumption which further promotes irresponsible consumption of water

Today, we don’t receive water bills as we do electricity bills in terms of usage. If an apartment complex receives a bill of Rs. 1,000 / month it is divided equally among the 4 units. Even though Unit A and Unit D are consuming higher levels of water which is unfair to residents of Unit B and Unit C. It may not seem like a big deal today but with increasing prices of water, one could start witnessing conflicts among residents.

Furthermore, results show that once the IOT enabled smart water meters are installed that allow for sub-metering by household, consumption by residents decreases by 35-50%. Since the water bill for each household is calculated based on their individual consumption, residents find themselves reducing their usage. This goes to show that the tracking of water consumption can lead to positive and conscious behavior changes thus reducing our water wastage. Some data and success stories here and here on the impact of smart water meters.

So why do we have to wait for Day Zero to approach when we can be more judicious today?

2. Rising prices of water and higher dependency of water tankers

Taking Bengaluru as a case study, the city has a requirement of 1.9BN liters per day whereas the water available is only 1.4BN liters per day. The rest of Bengaluru has to rely on water tankers for water supply which is significantly more expensive than the municipal water (see chart below).

The difference in costs as seen above is due to the lack of smart water metering that causes apartment complexes to pay more than independent houses even though they receive water from the same source – The Municipality (BWSSB). Furthermore, apartments that rely heavily on private water tankers for their water supply – common in metro cities like Bangalore, Chennai and Hyderabad, may end up paying 50-100 times more than those that rely on the municipality. However, the vast difference will only keep increasing as the municipality, in January 2020 proposed a 35% increase in price of water.*BWSSB – Bangalore Water supply and Sewage Board

This calls for fairness in water bills just like what we have with electricity bills.

BWSSB is implementing a regulation that any new building that is being built with an area exceeding 1,200 sq. ft. or having three or more houses will need to have water sub meters as it wants to promote judicious consumption of water. The regulation is only for new buildings as of today and is expected to become applicable to existing buildings as well in the near future.

So, the question that now arises is who will meet this demand for smart water metering? The current infrastructure used to measure water is highly inefficient. Non-Revenue Water (Difference between volume of water sent by utilities vs volume of water billed to customers) for India is 38% much higher than the global average of 30%, and some countries like Denmark have it as low as 6%. Frost and Sullivan expects the demand of smart water meters in India to be over 500K+ a year. We expect the market to be big huge no matter how you look at it. India has roughly 300MM+ electricity meters, and why shouldn’t a smart water meter be present wherever an electricity meter is present.

While one of the major problems that we have to contend with is the judicious use of water across households, there is another urgent problem that needs solving. Across the country studies conducted by various organizations have shown the quality of water available to Indians is sub-standard. Both the WHO and Niti Aayog have claimed that over 600 million in India face high to extreme stress over water and it has the highest number of people that lack access to clean water. India ranks 122 globally when it comes to the water quality index.

Groundwater in most cities in India is depleting at a faster rate than ever. Forcing municipalities and societies to dig deeper into the ground to source. As we dig deeper the water quality reduces.  water which in turn diminishes the water quality.

Electric Water Purifiers are highly under penetrated in India

Only 8.7% of households in India have electric purifiers. Inexplicable in a country with such poor quality of water. The lack of clean water is a serious health hazard and is known to cause several health problems and increase medical bills. Access and affordability remain a challenge for adoption of electric purifiers.